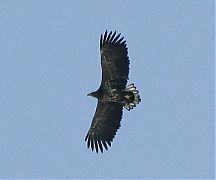 The white-tailed eagle is our largest bird of prey, with a wing span of 200-245 cm and a body mass of up to 6 kg. The upper and lower parts of an adult bird are (dark) brown, the head and the neck are pale brown with dark stripes, the entire tail is white, the beak is sallow and the
feet are yellow. The plumage of young birds is dark brown, making them easily confused with spotted eagles, especially in case of a brief encounter. However, the white-tailed eagle is significantly sturdier than the spotted eagle and its wing movement is slower. Visually, thewhite-tailed eagle is reminiscent of aflying carpet.

The white-tailed eagle feeds in coastal sea areas with shallow water and in larger bodies of inland water. Some pairs have adapted to hunting in fish ponds, thus “robbing” the ospreys of their prey.
The staple diet of the white-tailed eagle includes waterfowl (ducks, grebes, gulls) and fish, in wintertime also carrion. 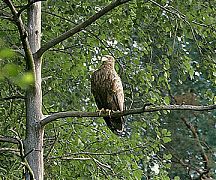 In Estonia, adult white-tailed eagles are usually sedentary, while younger birds move around quite a bit. The nesting places are usually located in fully grown coastal pine forests, mixed forests, or on bog islands. A pair of nest at the top of an old pine or aspen, and a nest that has been used for decades can weigh nearly a ton.
White-tailed eagles begin repairing their nest already in the middle of the winter, adding green pine branches to the construction. A full clutch, 1-3 eggs, has usually been laid by the second half of March. The white-tailed eagle must brood for approximately 38 days without break.
Most often two fledglings have learned to fly by the beginning of July, but almost every year, clutches of three have been seen near better hunting grounds.