Eagles and black stork in Estonia

Of the 6 species of Eagles nesting in Estonia 5 nest here regularly each year: white-tailed eagle, golden eagle, osprey, greater and lesser spotted eagle. Only the last confirmed nesting of short-toed eagles took place at the beginning of the 1970s.

Number of breeding eagles and black stork in Estonia

There are three main directions in the protection of eagles: habitat protection, monitoring and spreading information among people. In case of some species of eagles, e.g. ospreys, it is important to build artificial nests instead of the nests that have fallen down. Contemporary forestry is considered as one of the most significant factors influencing the population of eagles. Forestry influences the well-being of eagles in four ways: 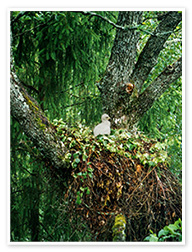 Since eagles use suitable nesting sites for decades, the main purpose of the protection activities so far has been to protect their suitable nesting sites (nests together with the protection area). For that purpose an area with a radius of up to 500 m depending on the species is set up around the nesting sites where economic activities and also presence of human beings during nesting time are forbidden.
In the near future more emphasis should be put on the protection of the entire habitat of eagles. The habitat of eagles consists of a nesting site and the nearby feeding area. With spreading information and through various planning processes we must preserve bays rich in birds and fish that are important for eagles, meadows near rivers, untouched wastelands and avoid the establishment of villages and roads or construction of power lines near the nesting sites of eagles.

The best example of the successful efforts conservationists have made is the protection of eagles. Only thirty-forty years ago white-tailed eagles, for example, were almost disappearing from Northern Europe. The eagles were on the verge of extinction mostly due to dangerous environmental toxins. Last century in the 1970s the use of extra dangerous pesticides and toxins containing heavy metals was prohibited in the Baltic Sea states. Thanks to this prohibition the number of sea eagles has increased here as well as elsewhere in Western Europe in the past decades but nevertheless the sea eagle is still among endangered species. By now sea eagles have again become regular inhabitants in our coastal areas. It is estimated that there are around 150 pairs of them in Estonia.

Eagles are endangered for the following reasons: