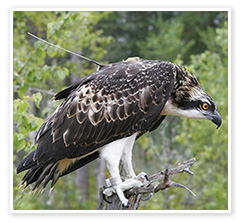 Since 2005 the Estonian Ornithological Society and the Eagle Club have placed satellite and GPS receivers on seven adult birds and one young bird.
Receivers are placed on the birds primarily for the purpose of researching the species and organising protection.
Birds who have received valuable “backpacks” include black storks (3 birds), greater spotted eagles and ospreys. All of these birds have also been named.

The GPS telemetric monitoring of ospreys takes place with the support from Eesti Põlevkivi Ltd. and State Forest Management Centre (RMK). The female bird that is called Maria was caught from the nesting site with eaglets closest to the Narva grand pitch.

We caught Raivo from the area of the Paasvere forest district in Lääne-Virumaa on the early morning of 22 July. He was nesting in an artificial nest, i.e. we built one artificial nest near a broken nest in 1991 and only in 2006 it was inhabited by black storks. Watching pictures with our Latvian colleagues, we came to the conclusion that he should be more than ten years old – this is indicated by the greyish head. The eaglets of Raivo were by the time their father got the backpack more or less able to fly; therefore, Raivo started flying towards the south on 28 July. He flew to Belarus where he stayed for some days and the following trip took him across the Dardanelles and Turkey to Israel. The fish ponds in Israel are a good migration stopover for Eastern European black storks. Some of them stay there for the whole winter; the black stork ringed in Estonia has also wintered in Israel during several years.

Ann is one greater spotted eagle with an unusual fate. To be more specific, Ann had been caught and ringed earlier in 2001. At that time she was already over 5 years old, thus she is more than 10 years old now…
Mart represents the true bred greater spotted eagles of Estonia which is proven by his appearance as well as DNA. We managed to catch Mart and place a transmitter on him on 29 August 2006.

Juku – the first bird in Estonia that received a GPS transmitter – is a greater spotted eagle. In 2005 we received new information about the use of feeding sites, beginning of migration and migration. Juku was caught on 15 August 2005 in Raplamaa; he had at the time 2 eaglets. Juku died probably in December 2005 during migration in Serbia.

Teele received her monitoring device on 24 September 2006 in the northern part of Viljandi County. When she was caught, she might have already been migrating and may thus not come back to the place where she was caught.